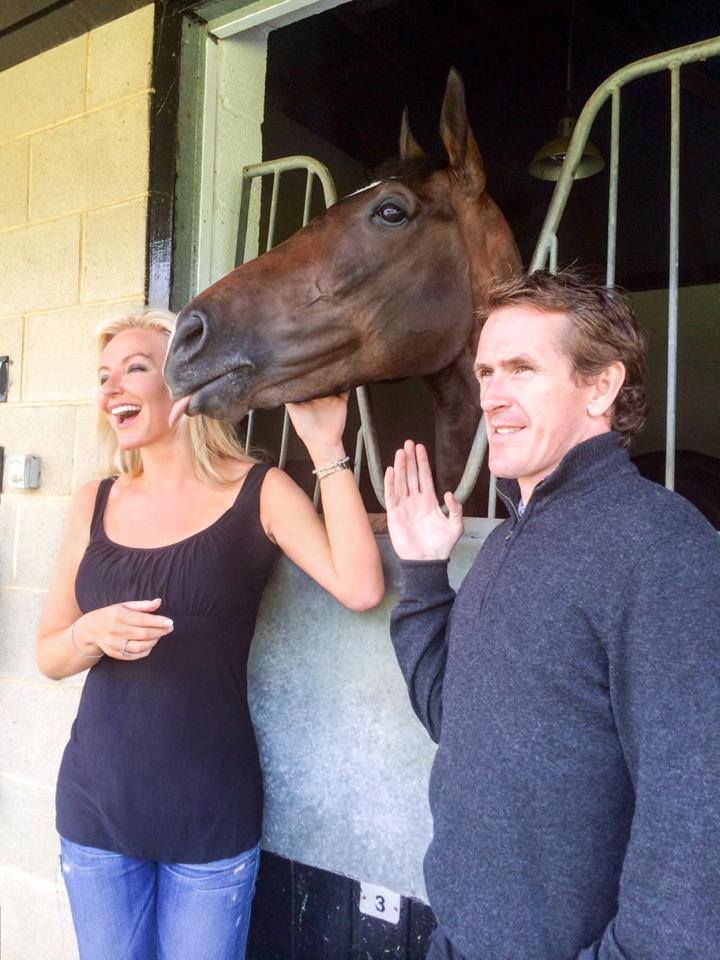 Horses lick us largely because they enjoy the salt on our skin’s surface. Some horses, however, lick people out of habit, to investigate, to play, or simply to pass the time.

When a horse licks its owner, most people don’t think twice about the purpose of the lick. However, there might be a deeper reason why horses lick people.

Why do horses lick?

Horses, like people, have distinct personalities, traits, and routines. They exhibit reactions to stimuli and events that compel us to doubt their meaning. Some of these habits, such as nudging or following you around, are quite simple to identify. Licking, on the other hand, perplexes many equestrians and horse enthusiasts.

So, what’s the deal with horses licking you? While some horses lick as a show of affection, this is not the major reason a horse would lick you. Your horse may be licking you because their sodium levels are low, signaling a possible health issue. It may also indicate boredom or a lack of mental stimulation.

As you can see, the reasons behind your horses’ licking might be extremely complicated. You are the greatest judge when it comes to determining why your horse is licking you or others. However, using the knowledge in this piece, you should be able to get some understanding of this unusual behavior.

Why Does a Horse Licks Their Owner?

A horse kissing its owner isn’t always a negative thing. There might be several reasons why your horse is sucking the crap out of you. If you have significant concerns, I recommend consulting with your veterinarian.

Horses, like people, have distinct personalities. To express devotion, they will lick their owner or carer. Some horse breeds, however, may develop a negative habit as a result of this tendency.

You must pay close attention to every licking action. It will aid in ruling out some assumptions rather than feelings of attachment.

Understanding your horse’s affectionate behavior will help you figure out why he’s licking so much.

A horse that isn’t getting enough exercise or mental stimulation may acquire the habit of licking anything, even its owner.

The problem stems from boredom. Changing your horse’s daily routine will help to resolve the habit in the long term.

Regardless of the horse breed, providing your horse with frequent exercise and innovative training approaches is the best answer.

Another probable reason for horse licking is nutritional deficits. They are licking the caretaker’s or rider’s skin to assist the horse in obtaining salt and minerals that are not given in their regular meals.

We propose that you provide your horse a nutritious, well-balanced diet to keep him from licking excessively.

The frequency with which a horse is treated might cause him to exhibit unusual behavior. Giving your horse goodies regularly tends to increase the frequency of the desire.

As a result, your horse will develop the habit of licking your hands in order to find its favorite goodies.

It would be preferable if you could distinguish between love and other disguised actions. Before making any assumptions, take the time to understand your horse’s licking behavior.

A nervous response to danger

If your horse is not licking you but instead licking or biting the air or doing nothing at all, this might be an indication of a frightened reaction to a passing threat.

Consider how close you came to getting in a vehicle accident or being bucked. That sensation of excitement coursing through your veins, as well as the large sigh you undoubtedly gave out. That is exactly what your horse is doing. Dr. Sue McDonnell goes into great depth about this on thehorse.com.

A horse can lick your hand for no apparent reason. It might be because of their original motivation, which has turned into a severe habit.

Correcting a horse’s persistent licking behavior is a difficult task. Stopping the behavior will need a significant amount of time and patience.

Why Is My Horse Licking More Than Usual?

Horses are one-of-a-kind creatures because their personalities vary with age. It is natural for a horse to lick the owner, walls, and other surfaces.

However, excessive licking might be a symptom of more significant problems that need to be treated. Here are some of the probable reasons why a horse may lick more than usual:

As a result of stomach ulcers, the horse tends to lick excessively. Licking encourages the horse to generate more saliva, which acts as an antacid. It aids in the relief of pain.

A horse licking more than usual might also be caused by separation anxiety or other behavioral concerns. The licking habit will be reduced if the underlying source of the problem is addressed.

In addition, if the licking activity becomes chronic and constant, we recommend contacting a local veterinarian. The veterinarian will evaluate the problem and provide a diagnosis.

Horses whose diet is deficient in essential minerals will develop an excessive licking behavior. To compensate for dietary shortages, your horse will begin licking walls, floors, riders, and other surfaces.

Mineral supplements are recommended for your horse. In addition, a well-balanced diet should be provided to address the problem.

Encouragement of the behavior

Many horse owners feel that licking is a show of devotion and, as a result, they reward the horse for demonstrating love.

As a result, the horse will adopt the behavior and begin licking more than usual in order to be rewarded.

Why Does My Horse Lick and Chew?

During training, your horse may exhibit signs of learning or submission. Constant licking and chewing is a frequent manifestation of the habit.

This is typically the greatest time to teach your horse new tricks and give him enough exercise to keep him from becoming bored.

Because of the current tense circumstances, non-nutritive chewing might be a symptom of aggressiveness. Your horse may approach another horse in a hostile manner, which is quite hazardous.

According to research, the chewing might be triggered by a transition from a dry mouth caused by tension to salivation linked with calm.

Horses are known to be affectionate toward their owners or riders. The nerve systems of the rider and the horse tend to resonate. To co-regulate or sync its system, the horse will change into a relaxation reaction by licking and chewing.

What Are the Potential Risks of Horse Licking Other Surfaces?

The habit usually develops as a result of a lack of nutrients in one’s diet. It is best to discover the underlying problems and treat them with mineral supplements.

Sand colic is more common in horses who lick the dirt. Your horse’s stomach will be disturbed on a regular basis as a result of the issue.

If nutrition isn’t the source of the problem, you should look at your horse’s environment, exercise, and mental stimulation.

According to research, a horse kissing the owner might be a sign of affection or a desire for their favorite foods.

Aside from that, a lack of mental stimulation is another probable reason for excessive licking and chewing. The behavior will be resolved if your horse is given adequate exercise.

To counteract the licking tendency, we propose training and developing your horse’s personality. Finally, restrict the number of incentives given whenever the horse displays affection.

Do horses lick you to show affection?

Having your horse lick you might appear to be a cute gesture of devotion. In fact, you should reward such expressions of affection with a treat! If your horse begins to lick you more frequently than usual, it might be because you have been encouraging their habit.

How do horses show their affection?

Horses, like humans, have several methods of expressing devotion to one another and to their owners. Some horses may appear nippy, continually placing their lips, or even teeth, on one other and on humans. Standing near to each other, playing, or caressing each other might be a show of affection.

How do you tell if a horse likes you?

Here are eight indications that a horse likes and trusts you.

Why does my horse kiss me?

Horses can offer kisses just like they can give hugs. Again, there’s no need to be alarmed if your equine companion begins kissing, licking, or breathing on you. These are all common indications of affection, and they might indicate that you have mastered your horse’s heart.

To summarize, a horse that licks displays symptoms of affection, boredom, a frightened response to danger, or a lack of mental stimulation, as well as probable health concerns such as pica or a lack of adequate nutrition.